We received this tweet via a Headline cameraman covering the war in Ukraine with the EU correspondent of the Irish public broadcaster RTE, who wondered if this was true.

Tweet by Anonymous account (@LatestAnonPress) claiming that people in Ukraine should turn off the geolocation on their phones, because Russia is supposedly using it for the war. 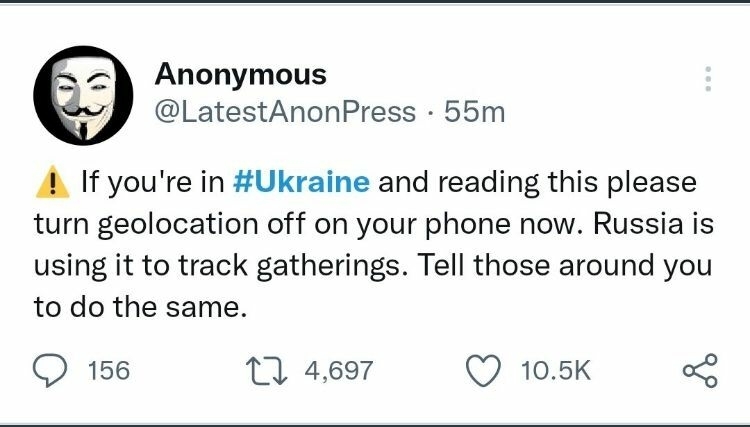 On a technical level

Turning off geolocation on your phone doesn't help in hiding your location. The location setting on your phone uses a mixture of GPS signals, WIFI access points, cell towers and IP addresses to determine your location. When turned off, you only take the GPS function out of the equation, but other services such as WIFI, Bluetooth and the cell network could still be used to track you if they are activated.

GPS signals are actually the only ones that don’t give you away, as they only receive signals from satellites, but don't send them. If you really want to disappear, you need to turn on flight mode, since that disables all of the functions above.

Fact denied by the Ukrainian government

Shortly after the tweet was launched, the Ukranian Ministry of the Interior denied the claim, saying disabling the location setting does not help to hide your location.

Moreover, information about public gathering places and shelters are often already publicly known and there is no need for Russians to track people's cell phones to see where they would hide. They already have some of that information.

They did however urge people not to post photos and videos tagged with their geolocation or to send information about the state of the terrain via messages. The best way not to be tracked is to discuss this over phone, according to the Ukrainian government.

Not a part of Anonymous?

We also tried to verify if the twitter account (@LatestAnonPress) really belonged to the hacker group Anonymous. Some sources deny this saying they are not part of the collective, but seeing as the “real” Anonymous is decentralised and doesn’t have a verified account, it is impossible to tell.

So far, there are several popular Anonymous accounts on twitter @LatestAnonPress being one of them.

How to check the real facts?

2. Read reactions and threads about the claim

3. Check statement of the Ukranian Ministry of the Interior

4. Analyse and verify statements made by the MI of UA

About the author
Liesa Pauwels
Liesa Pauwels is a Junior Researcher-Producer at Headline News Facilities Productions. Liesa holds a Master’s degree in Russian and English from the University of Ghent, and has studied in Novosibirsk, Russia and in Poland.
Others also read these

Headline Research: exciting plans for 2022!
18 januari 2022
Edit article Dashboard Settings Website Design Article cached on Tue. 31 Jan 15:26
Renew cache
We use cookies on this site
We use cookies on this site to provide you with an optimal user experience. Read our privacy statement
Functional
Accept all
Cookie instellingen
Read our privacy statement
Voorkeuren opslaan